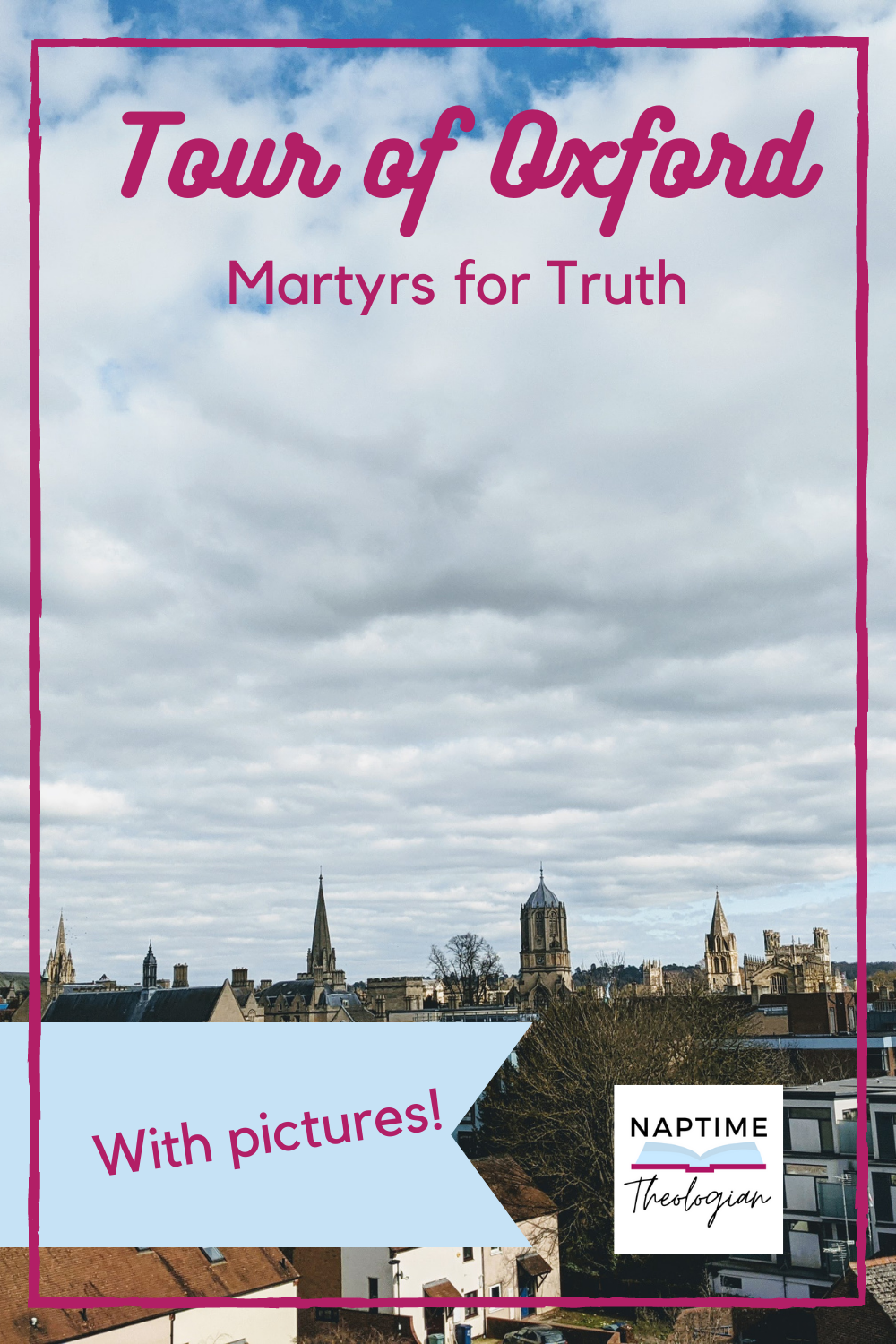 Tour of Oxford |Martyrs for Truth

Oxford, England is known as the city of spires. That is definitely true. I found that out this weekend as we took a walking tour around the city. But, the spires were not the coolest thing we saw. Read on to find my favorite sight.

Our walk began by Christ Church Cathedral. It’s facade is spectacular and we stood in front of it long enough to hear bells ringing overhead.

From there we walked through the city passing many colleges, shops, and, yes, spires. The views were simply breathtaking.

We passed this doorway which is rumored to have inspired C. S. Lewis when he wrote The Lion, The Witch, and The Wardrobe… see the fawns on the doorway and the lamppost back there?

All these sights were amazing. I was in awe of the architecture and craftsmanship of each and every building. They are intricate and delicate but also majestic and glorious. God has truly blessed man with creativity and design abilities that, in my humble opinion, reflect our Creator.

But here is the sight that inspired, encouraged, and made me stand in awe the most of all.

It doesn’t look like much. In fact, if you were on your way to work or class you wouldn’t even notice it. You’d definitely avoid going over it on your bike (or, at least, I would!).

But that spot is perhaps the most glorious spot in all of Oxford. Not for the pomp or magnificence of the windows, the arches, or the spires. But because of what happened there 400 years ago, in that spot marked by the bricks in the middle of the road.

That spot is the place where three men were burned to death for their belief that Christ is the head of the church. Crazy, right?

You see, 400 years ago was the English Reformation. Protestants were renouncing Catholic faith and, in some cases, being put to death for treason because of their faith. Two of these protestants were Hugh Latimer and Nicholas Ridley. They were first imprisoned for some time, then given a trial at the University Church in Oxford, England. Their trials quickly ended in a death sentence and subsequent burning at this spot.

Meanwhile, another reformer, Thomas Cranmer, was forced to watch the burning from this tower.

After watching two brave men, his friends, burned to death his reforms wavered. But, in the end, Thomas Cranmer was also burned for protestantism. Even though he initially recanted his reforms after the burning of Ridley and Latimer, he held firm in the end. When he was taken to be burned, he put his right hand in the flames first because that was the hand that had written his recantations of his faith.

I stood in the middle of the street amazed. This exact spot was where men gave their lives for the truth of God’s Word. They bravely endured the flames for Christ’s sake.

Suddenly, all the glory of Oxford, the buildings, the spires, the windows, the architecture, faded in comparison to this little patch of pavement.

Though Ridley, Latimer, and Cranmer’s names are not recorded in the Bible, their stories remind me of Hebrews 12, which says, “Therefore, since we also have such a great cloud of witnesses surrounding us, let’s rid ourselves of every obstacle and the sin which so easily entangles us, and let’s run with endurance the race that is set before us, looking only at Jesus the originator and perfecter of the faith, who for the joy set before him endured the cross, dispersing the shame, and has sat down at the right hand of the throne of God.”

Those verses remind us that Jesus is the author and perfecter of our faith. He draws us to Himself and He is the one that will give us strength to persevere.

AND that last line is just the best: “Who for the joy set before Him endured the cross, dispersing the shame, and has sat down at the right hand of the throne of God.” (Emphasis added).

Jesus has defeated death, He has conquered sin and the grave, He is the resurrection and the life (John 11:25). So, what have we to fear?

And, though we may not be burned for our faith today, we can be entangled by sin, held back by laziness, letting the devil take hold. Those martyrs who died in the very place where those bricks are reminded me to rid myself of every obstacle. To find every opportunity to serve the Lord. To not let sin entangle me and to run this race of faith with endurance. We can press on in the pursuit of holiness and God’s glory in Jesus’ strength.

So serve the Lord at every opportunity today. Make a commitment to be holy, to stand for truth, to pursue righteousness.

Then you will be running the race for Christ with endurance just as those three, faithful men did 400 years ago.

The grandeur of Oxford has nothing on their glorious sacrifice for God made in the middle of the street.

Happy New Year from us! I am definitely looking f