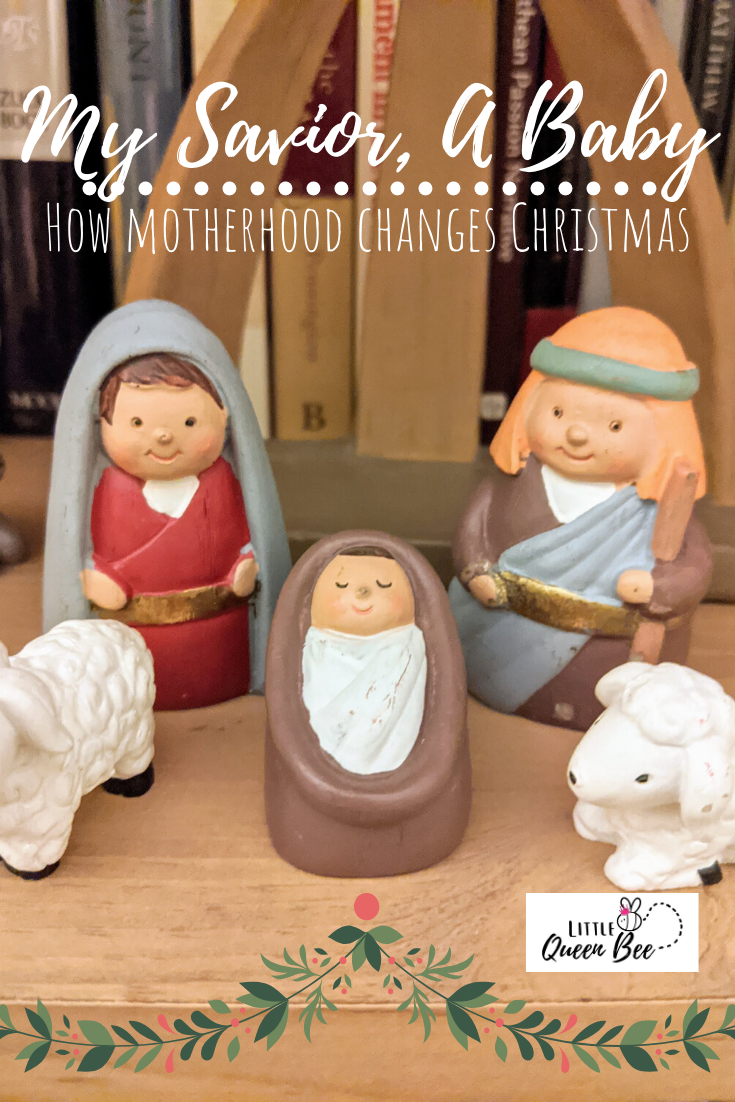 My Savior, A Baby

Christmas has changed so much for me now that I am a mother. And, not in the way you would expect. Now I feel like Mary is my BFF. I love reading her magnificat. And, unlike the popular song, she did know who she was holding on her lap, who she was nursing and cuddling, whose diaper (or whatever they used back then) she was changing.

I remember when I first had my baby. Words can’t really explain the feeling of holding this little person who you’ve already carried for nine-ish months in your hands… there’s nothing like it. I remember just looking and looking at her for so long, especially that first night in the hospital. I didn’t want to go to sleep that night because I just wanted to keep looking at her. I was in awe of her little hands, feet, eyes, belly, it all was so endearing, sweet, and delicate. She was totally dependent upon me and in need of my care.

Although I gave birth in March, I immediately thought of my Savior. How He came in just the same way that my daughter had. That He grew from tiny little cells into a baby. That the King of the universe once had little, delicate feet, hands, fingers, toes. That He was totally unable to care for Himself, that He was totally dependent upon His mother.

Then I thought next of Mary. She had all the feelings that I felt, holding her newborn baby for the first time. The baby she’d known from the inside, now on the outside. I’m sure she looked at Him for a long time too, running her fingers over His arms and legs, lingering on every little detail, loving each one.

I had always thought that it was humbling for Jesus to become a man. He is THE King of the universe, He’s the Lord of everything, and He became a man. But I did not think much of that until I had a child of my own. He became a man, yes, but not only that, He became a little newborn. On that holy night, (because we moms know it wasn’t silent), He became a tiny little baby.

It’s no wonder Paul said that Jesus humbled Himself (Philippians 2:6). How humbling that the Lord, who made the whole earth and everything in it, would become a tiny little baby inside of Mary. I mean He placed the stars in the sky and laid the foundations of the world, now He becomes a tiny newborn.

And the kicker? He did that for me… for you… for all who would believe in Him as their Savior.

He willingly humbled himself so low as to become Mary’s baby so that He could save me from my sin. Our Lord became a baby, so that He could be our Savior. He was a child to end all suffering. A little boy to save us from our eternity away from God.

John 3:16, “For God so loved the world that He gave His only begotten Son, that whoever believes in Him, shall not perish, but have eternal life.”

As Christmas comes tomorrow, I am filled with awe that God would do all of this for me to be His child. He would come as a baby, grow into a man, experience life as we know it, and then suffer and die in my place so that I could be saved.

I hope, friend, that you are filled with this same awe. Your Savior went to such lengths to save you. Praise God for His tender mercies toward us!

“To give to His people the knowledge of salvation by the forgiveness of their sins, because of the tender mercy of our God, with which the Sunrise from on high will visit us, to shine upon those who sit in darkness and the shadow of death, to guide our feet into the way of peace.” Luke 1:77-79

I started growing a garden! Here in England there