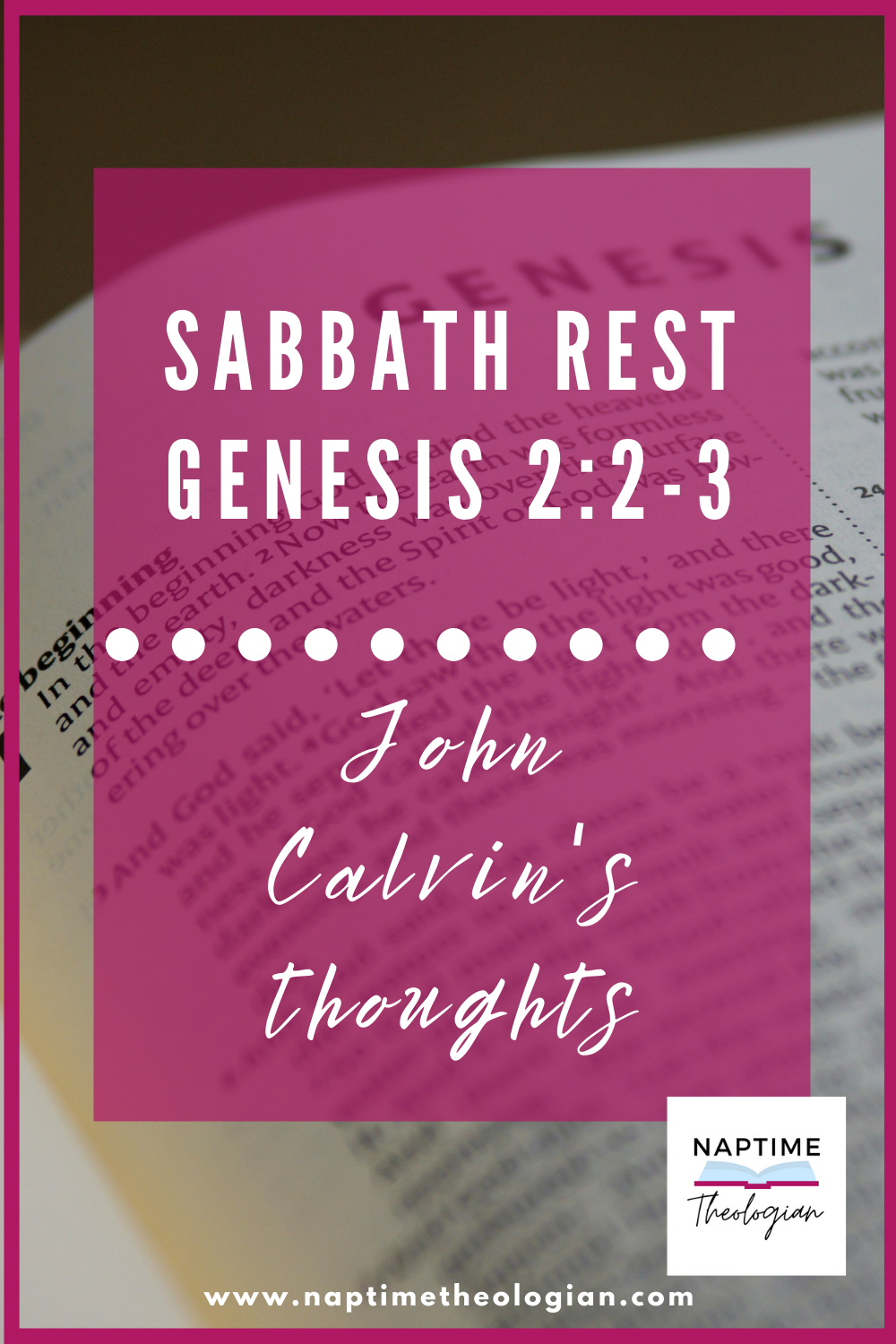 As I have been studying Genesis, I have been reading through John Calvin’s commentary on the whole book. His comments are the Sabbath from Genesis 2:2-3 were very helpful and encouraging to me. But I’m not ready to write a whole post on the Sabbath at this time. I think it’s a really deep topic that will require more study. So, I wanted to at least share Calvin’s comments here so that you can read them as well.

“It appears that God is here said to bless according to the manner of men, because they bless him whom they highly extol. Nevertheless, even in this sense, it would not be unsuitable to the character of God; because his blessing sometimes means the favour which he bestows upon his people, as the Hebrews call that man the blessed of God, who, by a certain special favour, has power with God. (See Gen. 24:31.) ‘Enter thou blessed of God.’ Thus we may be allowed to describe the day as blessed by him which he has embraced with love, to the end that the excellence and dignity of his works may therein be celebrated.

“Yet I have no doubt that Moses, by adding the word sanctified, wished immediately to explain what he had said, and thus all ambiguity is removed, because the second word is exegetical of the former. For קדש, (kadesh,) with the Hebrews, is to separate from the common number. God therefore sanctifies the seventh day, when he renders it illustrious, that by a special law it may be distinguished from the rest. Whence it also appears, that God always had respect to the welfare of men. I have said above, that six days were employed in the formation of the world; not that God, to whom one moment is as a thousand years, had need of this succession of time, but that he might engage us in the consideration of his works. He had the same end in view in the appointment of his own rest, for he set apart a day selected out of the remainder for this special use.

“Wherefore, that benediction is nothing else than a solemn consecration, by which God claims for himself the meditations and employments of men on the seventh day. This is, indeed, the proper business of the whole life, in which men should daily exercise themselves, to consider the infinite goodness, justice, power, and wisdom of God, in this magnificent theatre of heaven and earth. But, lest men should prove less sedulously attentive to it than they ought, every seventh day has been especially selected for the purpose of supplying what was wanting in daily meditation. First, therefore, God rested; then he blessed this rest, that in all ages it might be held sacred among men: or he dedicated every seventh day to rest, that his own example might be a perpetual rule. The design of the institution must be always kept in memory: for God did not command men simply to keep holiday every seventh day, as if he delighted in their indolence; but rather that they, being released from all other business, might the more readily apply their minds to the Creator of the world.

“Lastly, that is a sacred rest which withdraws men from the impediments of the world, that it may dedicate them entirely to God. But now, since men are so backward to celebrate the justice, wisdom, and power of God, and to consider his benefits, that even when they are most faithfully admonished they still remain torpid, no slight stimulus is given by God’s own example, and the very precept itself is thereby rendered amiable. For God cannot either more gently allure, or more effectually incite us to obedience, than by inviting and exhorting us to the imitation of himself. Besides, we must know, that this is to be the common employment not of one age or people only, but of the whole human race.

“Afterwards, in the Law, a new precept concerning the Sabbath was given, which should be peculiar to the Jews, and but for a season; because it was a legal ceremony shadowing forth a spiritual rest, the truth of which was manifested in Christ. Therefore the Lord the more frequently testifies that he had given, in the Sabbath, a symbol of sanctification to his ancient people. Therefore when we hear that the Sabbath was abrogated by the coming of Christ, we must distinguish between what belongs to the perpetual government of human life, and what properly belongs to ancient figures, the use of which was abolished when the truth was fulfilled. Spiritual rest is the mortification of the flesh; so that the sons of God should no longer live unto themselves, or indulge their own inclination. So far as the Sabbath was a figure of this rest, I say, it was but for a season; but inasmuch as it was commanded to men from the beginning that they might employ themselves in the worship of God, it is right that it should continue to the end of the world.”

Creation of Man and Woman | Genesis 2

Why Should You Study Theology?

Happy New Year from us! I am definitely looking f