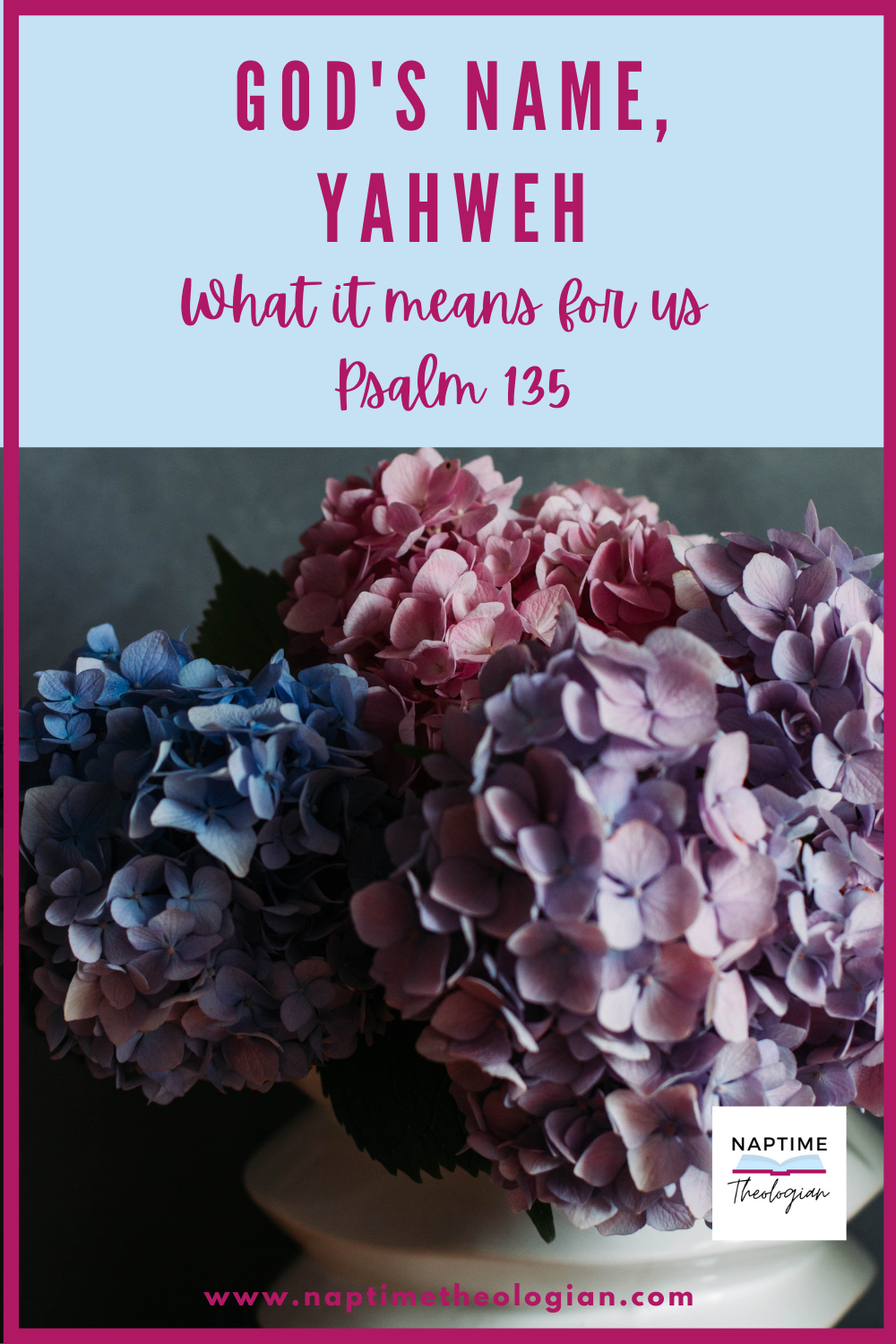 There are many names of God in the Scriptures. Most center on a certain aspect or attribute of God and are, therefore, descriptors of God. But there is only one name in the Bible that is God’s real name: Yahweh.

When I went to my first Old Testament class in college, I remember asking the teacher at the end of the semester, “What is the tetragrammaton?” I felt fancy using a big word like that, but I was genuinely asking the question because I had never heard an explanation of God’s name, Yahweh. And of all the things I learned in that class, this truth stuck out the most: God’s name reflects His character.

God first uses this real name as He introduces Himself to Moses in Exodus 3:14-15. Here are those verses:

The Hebrew word that God uses to say “I Am” is YHWH. It’s called the tetragrammaton because is contains only 4 Hebrews letters. It is helpful to note that Hebrew as a language, doesn’t have vowels in its words. When Hebrew was at one time lost as a language and then rediscovered vowel pointing was added so that people could know which vowels went where. But in this word, YHWH, we do not have vowel pointing, so it has been pronounced as “Jehovah” for many years. Christian scholars have translated this Word into “Yahweh” by adding the vowels from “Lord” (Adonai in Hebrew) to the consonants of YHWH.

This name of God is used frequently throughout Scripture, you will see it written as LORD in all capital letters. In a new translation of the Bible, the Legacy Standard Bible, you will see the translation for God’s name as Yahweh instead of the LORD as in previous translations.

Now, why does God use this name when speaking with Moses in Exodus 3:14-15? Well, if you remember the story, Moses is unsure about going back to Egypt and rescuing the Israelites and speaks to God about this. Then God answers Moses’ complaints and unsurety with His one and only name, Yahweh, because His name reflects His faithfulness to His covenants and, therefore, to His people. John Calvin, the reformer, wrote that, “[God] alone is worthy of the most holy name, which is profaned when improperly transferred to others; and then sets forth his inestimable excellency, that Moses may have no doubt of overcoming all things under His guidance.”

God quells all of Moses’ fear in just one simple phrase, His name. And God reveals to Moses, and to us in the Scripture here, that His name, Yahweh, is His covenant name because He says, “The Lord, the God of your fathers… the name for all generations to call upon me.”

Herman Bavinck, a dutch theologian, put it this way, “As God reveals himself, so is he; in his names he becomes knowable to us… YHWH, the only name that denoted not an effect or a power, but God’s being itself. …Scripture reveals God to us as YHWH (the Lord). YHWH is the covenant God of promise, the faithful one who saves his people. YHWH is the highest revelation of God in the Old Testament; YHWH is God’s real name. [And] the name YHWH is the description and guarantee of the fact that God is and remains the God of his people, unchanging in his grace and faithfulness.”

God’s covenant name, Yahweh, is used throughout the Scriptures. But Psalm 135 emphasizes the divine name in particular. Here are just the first 7 verses, note how many times Yah or Yahweh is used.

1 Praise Yah!
Praise the name of Yahweh;
Praise Him, O slaves of Yahweh,
2 You who stand in the house of Yahweh,
In the courts of the house of our God!
3 Praise Yah, for Yahweh is good;
Sing praises to His name, for it is lovely.
4 For Yah has chosen Jacob for Himself,
Israel for His treasured possession.
5 For I know that Yahweh is great
And that our Lord is greater than all gods.
6 Whatever Yahweh pleases, He does,
In heaven and on earth, in the seas and in all deeps.
7 The One who causes the clouds to ascend from the end of the earth;
Who makes lightnings for the rain,
Who brings forth the wind from His storehouses.

And later, in verse 13, the Psalmist speaks directly about God’s name:

Why does this Psalm use Yahweh so many times? Because it is talking about God’s presence with His people and how He is their covenant God. It only follows that the Psalmist would use the covenant name of God, Yahweh.

Commenting on Psalm 135 in Reformed Systematic Theology, Joel Beeke said, “What does this Psalm tell us about God’s name? It celebrates God’s election of the people of Israel, His presence with them, and His goodness to them. It also celebrates God’s absolute supremacy, total sovereignty, and glorious eternity in contrast to the dead impotence of man’s idols. Both of these aspects are revealed in God’s mighty works of providence, judgment, and salvation. Both call for Israel’s reverent praise. Both are declared in the name of the Lord.”

What Does God’s Name Mean for Us?

God has revealed Himself to us through His name in Scripture and we should reverently praise Him for it. There’s no other response that we, as servants of the King, should have to our Master. Praise is the only option.

Charles Spurgeon, an English preacher, said, “Let His character be extolled by you, and let all that He has revealed concerning Himself be the subject of your son; for this is truly His name. Specially let His holy and incommunicable name of “Jehovah” be the object of your adoration. By that name He sets forth His self-existence, and His immutability; let those arouse your praises of His Godhead. Think of Him with love, admire Him with heartiness, and then extol Him with ardour. Do not only magnify the Lord because He is God; but study His character and His doings, and thus render intelligent, appreciative praise.”

We should do all of that because of God’s name! What a gift of God that He has chosen to reveal Himself to us in His name. It only makes sense that at the end of time every knee shall bow and every tongue confess at the mention of His name (Philippians 2:10-11).

So, make God’s name a bolster for your soul. Let it remind you of His unchanging ways and faithfulness throughout generations. May it lift your soul in times of darkness and carry you through. Then praise Him for His name.

How to Be a Happy Christian | Psalm 32

How to Study the Psalms